Even full-margin garden centers can use pricing to drive traffic 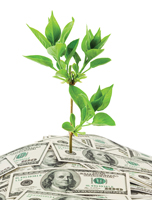 If this year is anything like the last, garden retailers will be competing with anyone and everyone to get the public’s attention. As the scramble for people’s business continues, big box and national brands seem to be willing to try any rebate, coupon or incentive to tempt consumers to step into their stores or to visit their websites. In marketing terms this is called “driving traffic.” You might call it giving the farm away.

Here’s an example of what you’re up against: We bought a kitchen gadget for a Christmas gift, prompting a string of thank-you coupons designed to lure us to go get another and a flurry of e-mailed “discount off anything” coupons and rebates.

Once the company had our address it sent a seemingly endless round of when-you-buy-something-you-get-a-follow-up-coupon for next time—which could have been the next hour. In the end we bought two more of the same gadget as gifts, and I think this national retailer owes us about $5!

It is clear that the bigger national retailers are buying market share at the expense of margin, which has hardly been a core strategy in the garden center industry. But these are different times, and if the public is being seduced by endless lower-priced offers, the independent channel of our industry should probably take notice and play along—unless you have a very deep pockets and strong nerves.

Now that point-of-sale systems are, thankfully, becoming much more common, garden center operators and their teams can see margin dollars for departments, categories and even individual lines in plain black and white. This is finally changing pricing policies from the same markup on everything to a much more practical approach of variable margins.

The overall price perception of an entire garden center typically hinges on the pricing of less than 100 core items—out of thousands of SKUs you carry. If your basic 4-inch geranium is $2 more than the guy down the street, your red Knock Out rose is $7 over his price and your lawn food is double the competition, the public will assume that everything you carry will be similarly priced. Given the bargain and coupon madness of last Christmas, that will be a bad perception to generate in 2011.

You can be practically giving away a beautiful topiary or an exquisite moss basket, but if your common “Known Value” items are not within, say, 20 percent of what the public perceives a comparable store charges, you will be in trouble. This Known Value or KV concept has been around forever, and in a recession it MUST be at the core of any garden center pricing policy.

So while the local Ace Hardware store might have one SKU of a Known Value weed killer at 29-percent gross margin from Friday to Monday, the local garden center still has the same product all year long at full price—and the whole company seems overpriced.

My margin-mantra of “Get it where you can, give it where you have to,” still falls on stony ground too often. Some buyers and managers are still living in the 2005 bubble that created prices like $29.99 for a 2-gallon, average-quality, 30-year-old variety of spirea. By all means price-up on a new sexy spirea, and get that three-times mark up if that is what you need. But please don’t do that to KV lines.

The big drop in demand for nursery plants (woodies) means that there are deals to be had nationwide from growers; the cost of goods in that product line has come down for those who’ve capitalized on this opportunity. Smarter retailers have selected a few price-sensitive lines to pass on savings to the consumer under a “We found a deal for you” type of message—and they win some kudos with a public that is still shy to buy.

An even better tack is to use this cost advantage to generate more cash with volume-buy offers, such as “3-for-2,” and so on. Retailers should always try to generate extra unit volume by showing cash savings, rather than giving a percentage discount on each plant. A discount just means that the customer gets what she came for but at a lower price. Volume breeds shopper excitement, keeps the product fresh and helps the grower out, too. When the industry pendulum swings their way again that might be worth something.

I still see POS reports with gross margins as high as—wait for it—67 percent on nursery stock. Not surprisingly, it is still sitting in the yard awaiting expensive labor to put it away for winter (but that’s another story).

Just my suggestion of reducing prices on selected items for a short-time promotion has sent some clients into shivers. As an industry we have never embraced a strategy of selective pricing or shown much enthusiasm for mail-in rebates that are driving so much traffic for the hardware and family-owned independent stores these days.

I am not advocating slashing prices on hundreds of items. Rather, I recommend a more realistic approach at a time when pricing-to-drive-traffic seems to be the standard promotion “play” by corporate America.

Cutting selected margins and therefore prices has several benefits, including showing that a company is trying to stay relevant at a time when many consumers are struggling.

Despite stock market rises, this spring will not be business as usual or back to the heady days of 2006. So independents have to take a leaf out of the big-guys’ playbook and drive traffic with pricing policies that keep them seeming relevant to the consumer. So let the selective slashing begin!

A price plan that works

Here is what worked for one retailer last year: The company reduced the price of a national brand of tie-in fertilizer from $16.99 to $12.99, with new shelf-talkers highlighting the lower price. The competitor’s price was around $11.

Not much happened. Then the store began cross-merchandising the fertilizer almost everywhere. Unit sales increased by 30 percent. Then the owner ran a training session on the product and told the team why he had cut prices on that one item. Unit sales climbed another 15 percent. By then he had more than made up for knocking $4 off each packet in the first place.

My suggestion then was to offer sales staff a short-term spiff of $1 on the product, with funds for the program coming from co-op money. Then publish results each week in the staff room—the idea being that there’s nothing like a bit of competition to boost enthusiasm. Sales went up by another 25 percent, and, with the co-op rebate, there was no loss of income from the spiff program.

The end result is a sustained increased volume of around 55 percent on that one SKU and a small increase in gross-margin dollars, as the store, meanwhile, came to be seen as price sensitive to the consumer. This was such a good win-win that the owner plans to select a monthly Known Value line for each department and use a mixture of education, cross merchandising and incentives to increase sales.

Charge it to the marketing budget.

You may not have the same results. But if you slash Weed-B-Gon from $14.99 to $10.49 for eight weeks, the loss is relatively small. Few average-sized garden centers sell more than a few cases of each KV hard goods, and losing $324 over the year is still a very low-cost way of changing your image in a recession. Even a larger volume KV, such as a basic geraniums, can be used as a traffic driver. Losing $10,000 in gross-margin dollars on these staples is still worth the investment—and cheaper than a full-page ad. Consider funding these price changes from the advertising budget.